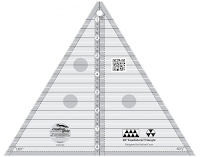 It was a long day and a good day. Being Monday, it was entirely devoted to software technical documentation. But now it's Monday night, and the creator has come out to play. Yesterday I cut the pieces for the quilt.  It's an ingenious technique: First you find the repeat in the pattern of the fabric you've chosen, Then you cut six selvedge-to-selvedge lengths of the fabric one repeat wide. Once you have these six identical strips, you layer them on top of each other so that the patterns of each layer line up exactly from top to bottom... Have I lost you yet? For those of you who are curious and aren't lost, read on. For the rest, skip to the next paragraph. For the pattern I am using, the repeat is 23" wide. This is an awkward, indivisible size because the next step is to cut the lengths into even smaller strips--3.75"-4" in width. These strips will then be cut into equilateral triangles with the aid of the lovely device above right.

The goal of all the pattern planning and laying out and cutting is to get sets of six identical pieces of fabric to arrange into hexagons. You can either put the triangles in each set together randomly (pick one of the points and use it as the center of the hexagon for each piece), or you can be like me and try out all three combinations for each hexagon, taking pictures of each in order to decide which of the three you like best. Then you pin them together and set them aside to sew.

Last night I put together 43 hexagons. Tonight I finished the last 27. I wish I hadn't finished listening to Kitchen Confidential over the weekend (read by Anthony Bourdain himself) as that would have been a perfect accompanying activity for laying out hexagons. As. it was, last night I watched See, a series set in a dystopian future where all human are blind, and tonight I indulged in three episodes of Clarkson's Farm. Dave couldn't get through either of them with me--and you can see why with Clarkson's Farm featuring Jeremy Clarkson nattering on about planting crops, raising sheep, running a farm stand, raising chickens, planting trees, the bloody regulations, and irrigating--all from the perspective of someone who has no background in farming, no patience, and very little ability to listen to the advice of the people he hired to advise him. If you don't know who Jeremy Clarkson is, look him up. A less likely English farmer you would be hard pressed to meet.

But back to the hexagons. Every part of this quilt process so far has been magical. When I sit down to sew all the fiddly little pieces together, I may feel differently,. But I don't think so. Each hexagon is a tiny work of art--and no two of the sixty I cut are the same. I think opening up each one of them to sew it together is just going to be another ooh-ah moment.

I close with some of my favorite sets. Each of the pictures in the sets of three is made by turning the triangles in the hexagon in a different direction. Sadly, only one of the three will be realized as no two sets are alike. 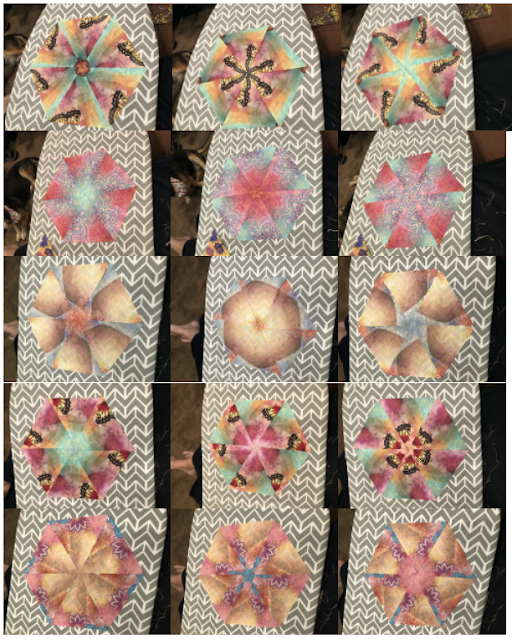 I guess I should have taken the pictures on a plain background instead of my ironing board cover... 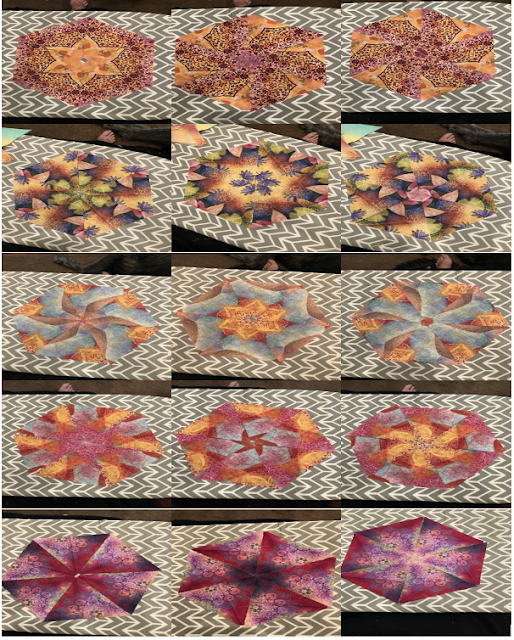 Scribed by Brenda Griffith at 11:07 PM

I'm glad that you are enjoying the show. Pity that Dave doesn't appreciate it. Very cool work on the quilt!

how will you ever decide which hexagon to use. all three versions of each are wonderful!